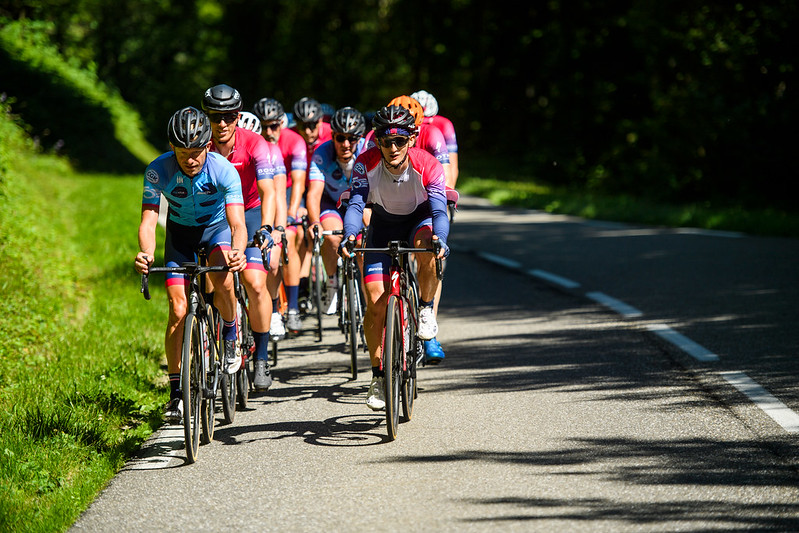 The Tour 21, the incredible endurance challenge which sees a group of amateur riders tackle the entire route of the Tour de France just one week ahead of the professionals, heads into the final week of the Tour de France route having raised over £800,000 of the £1-million target for Cure Leukaemia.

The team has now covered over 2,980km after 18 stages of the 21. Eighteen riders rolled out of Copenhagen on stage one back on Friday 24th June, soaking up the atmosphere of the soon-to-arrive Tour de France which had already decorated the city. Three stages in Denmark got the challenge underway before a rest day and transfer back to France where the ride continued with a series of flat stages which included the brutal cobblestones of northern France and the infamous Paris Roubaix – the scene of chaos on stage 5 of the Tour de France just one week later.

The mountains got underway on stage 7 with a steep finish atop La Planche des Belles Filles setting the tone for a succession of tough hilly and mountainous days in the saddle, broken up by the second rest day of the event, before heading into the Alps. The infamous Alpe d’Huez was just one of many mountain climbs to conquer for The Tour 21 riders. Over the course of 48 hours last week, the team cycled up over 8,500m of elevation – the equivalent of 26 Eiffel Towers or 1,954 double-decker buses stacked on top of each other.

Sadly, Cure Leukaemia Patron and co-founder of The Tour 21, Geoff Thomas MBE had to step off the bike and withdraw after the first week due to injury, bringing his 2022 ride to an end. However, the former footballer and blood cancer survivor has pivoted into campaigning mode to help the ride smash its target of raising £1-million.

“It was a really tough decision to stop but the brutal nature of the Tour has eventually worn down my body until my knee could take no more punishment. I’ve had rheumatoid arthritis in my knees for a while and it was becoming too painful to pedal, with swelling too,” Geoff explained upon returning to the UK. “I know that the team out there is going to smash it though – there’s such camaraderie in that group and some really inspiring people who can motivate so many more to get involved in this event.

“Collectively we’ve raised over 80% of our target but there’s still a long way to go so we all need to keep pushing and spreading the word of the amazing efforts that each and every one of the riders is putting in day in day out.”

The second half of The Tour 21 has presented plenty more challenges for the 17 remaining riders, each of whom have their own reasons for riding. The stages include some tough tests in the Pyrenees before eventually rolling into Paris on Sunday 17th July. Helping the riders keep going each day is a full support crew including ride leaders, support vehicles, physiotherapists, mechanics and other helpers to allow the riders to focus on the job of getting to the next finish line.

You can donate to The Tour 21’s fundraising efforts on the event’s Just Giving page here.

If you’ve been inspired by The Tour 21 and would like to enquire about riding the 2023 event, visit www.thetour21.co.uk.