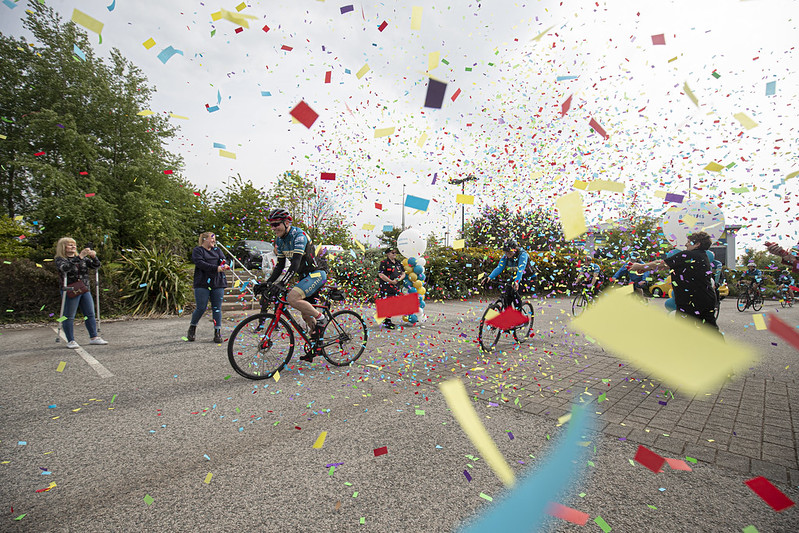 By Joe White4 June 2021No Comments

Northern food and drink retailer Booths is celebrating a record-breaking fundraising effort for their 350 mile cycle ride across all 27 stores, 3 support sites and the world renown cancer treatment centre, The Christie Hospital in Manchester.   The tour itself raised over £30k bringing the total fundraising efforts from the Booths team to £60,000 for Cure Leukemia. Booths will continue to fundraise throughout the summer for Cure Leukemia, joining their Great British Barbeque campaign to “Cook for a Cure,” which encourages people to throw fundraising barbeques for family and friends.

The Tour, which took place over 5 days across Booths Country, saw colleagues cycle in stages visiting all 27 stores and 3 support sites across Lancashire, Yorkshire, Cumbria, Cheshire and Greater Manchester along the way.

The idea for the event came from Nigel Murray, COO of Booths, a keen cyclist, who became aware of the charity after hearing about patron Geoff Thomas, a former England footballer who was diagnosed with chronic myeloid leukaemia in 2003.

“It’s been a terrific tour, the support from suppliers, some of our customers, our store teams and my colleagues pushing themselves every day to keep riding for charity, it’s been inspiring. I’m absolutely delighted with the £60k total we’ve raised to date and we’ll not stop there.  We have lots more fundraising to do throughout the summer.”

The Booths team together with their suppliers, part of the wider Booths family, have introduced a number of fundraising streams for Cure Leukaemia in addition to the Tour O’ Booths, including a range of charity cards from Kendal artist Bob Sutcliffe, a Tour ‘21 Beer from Ilkley Brewery, a range of biscuits and cakes from Bryson’s and Studio bakeries and a special Tour O’ Booths loaves of bread from Bell’s of Lazonby.

“The pandemic has really hindered the fundraising efforts of many charities, particularly smaller charities like Cure Leukaemia.  I’m really heartened to see how effective our collective “Booths” team effort has been.”

“After a hugely challenging year for our teams at Booths the tour has brought us all together to raise money for a great cause. Finishing the Tour on World Blood Cancer Day made the finish that bit more meaningful, knowing that our team have raised valuable funds to support families struggling with cancer and help find a cure.”