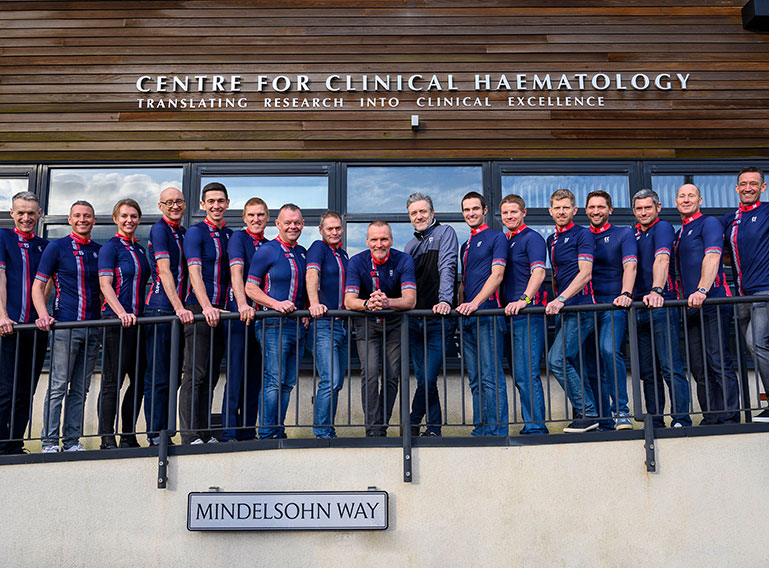 Cure Leukaemia named as first ever charity partner of the Tour de France.

The Tour 21, which will take place from Saturday 19th June – Sunday 11th July 2021, will see a team of 25 amateur cyclists led by former footballer, blood cancer survivor and Cure Leukaemia Patron Geoff Thomas taking on all 21 stages of the Tour de France with the aim of raising £1,000,000 for Cure Leukaemia.

This groundbreaking partnership, announced just days before the official 2021 Tour de France route reveal, is the legacy of Geoff Thomas’ phenomenal cycling achievements since his diagnosis with chronic myeloid leukaemia in 2003, just months after finishing his professional football career.

Thomas, 56, who represented England, Crystal Palace, Wolves and Nottingham Forest during his 20-year career, was initially given just 3 months to live in 2003, but thanks to treatment from Cure Leukaemia’s Co-Founder Professor Charlie Craddock CBE and a stem cell transplant from his sister Kay, Geoff went into remission in 2004 and turned his mind to supporting the doctors and nurses that helped save his life.

During his treatment, Geoff was inspired by the survival stories of others and decided to cycle the full Tour de France ahead of the professionals in 2005 to raise funds which led to him being awarded the Helen Rollason Award at that year’s BBC Sports Personality of the Year. Geoff then went on to complete the Tour again in 2007 and then in 2015 he returned to Cure Leukaemia to take on the gruelling 21 stages once more.

In 2017, Geoff cycled the Tour de France for a 4th time as well as the Giro D’Italia and Vuelta to help Cure Leukaemia raise an additional £1m towards the expansion of one of Europe’s biggest Haematology Centres in Birmingham.

This year, 15 years after he first took on the Tour, Geoff was due to ride for the final time with 18 other amateur cyclists with the aim of raising £1m for Cure Leukaemia to fund the national Trials Acceleration Programme (TAP) which the charity began funding in January. Consisting of 12 blood cancer centres across the UK, TAP enables patients from a catchment area of 20 million to access potentially life-saving treatments for all forms of blood cancer through clinical trials and Geoff and his team’s efforts would have funded this network for 12 months.

As a result of the COVID-19 crisis, the event was cancelled leaving Cure Leukaemia with a £1,000,000 shortfall. The team is committed to completing their challenge in 2021 and through this official partnership with The Tour de France the charity is hoping Geoff and the team can exceed their £1,000,000 target and raise increased awareness of Cure Leukaemia as a leading national blood cancer charity. Speaking about the partnership Geoff said:

“I am extremely honoured that Cure Leukaemia has been named as the first ever Official Charity Partner of the Tour de France in the UK. When I embarked on what seemed a completely crazy challenge in 2005, I could never have imagined that I would not only go on to ride the globally iconic Tour de France route five times nor that our event would secure such a prestigious level of recognition from within the world of cycling.

“Ultimately, the purpose of taking on these challenges is to provide hope to blood cancer patients in the same position that I was back in 2003 and now this event is set to continue doing this after I finally hang my cleats up in July 2021. I would like to thank everyone that has helped myself and Cure Leukaemia over the years to get us to this point and I look forward to our most successful event yet when we take on The Tour 21 next June.

“Through this partnership, the Tour 21 event in 2021 and onwards will open up a range of exclusive opportunities for our team including staying in the same hotels which will be used by the professionals a week later. I’m delighted all of our team has committed to riding in 2021 but we do have 5 places available for people to join us next June so if you are interested please do visit the website and get in touch.”

“We are proud to announce Cure Leukaemia as the Official Charity Partner of the Tour de France in the UK. The charity’s work not only benefits the whole of the UK but also has a clear aim to help hasten global progress towards finding effective treatments for all forms of blood cancer and we are excited to partner with them over the next three years.”

“This partnership is true testament and legacy to Geoff’s extraordinary and selfless efforts to help and inspire others over the last 17 years. In securing this partnership and association with the world’s biggest annual sporting event, we hope that it not only raises awareness of Cure Leukaemia at a global level but also provides us with the opportunity to secure increased fundraising potential from The Tour 21 and expand our range of cycling events and opportunities going forward.

“Led by Geoff, cycling has played such a key role in the growth of Cure Leukaemia since 2015 and we are immensely proud to now be officially associated with the world’s most famous and prestigious professional cycling event.”